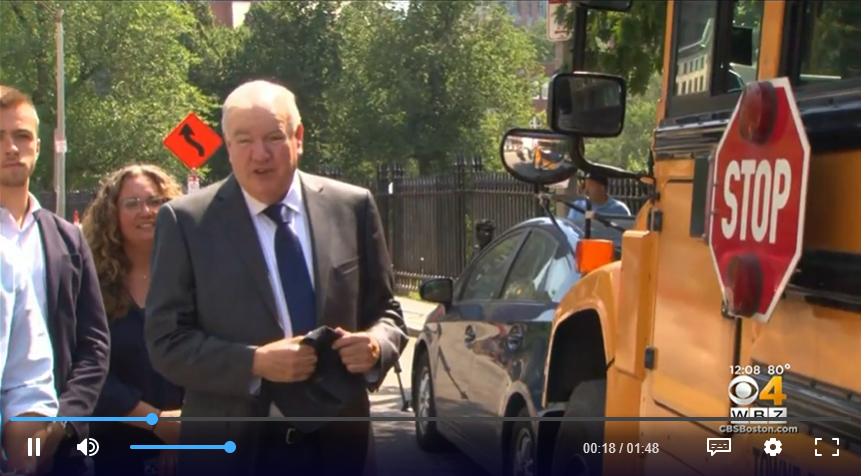 BOSTON – A new school bus technology that would make it safer for children to ride the school bus is being considered by legislators.

The legislation would allow video cameras on school buses to capture vehicles who don’t stop for buses with their lights on and ultimately take action against that driver.

“When they’re crossing the road to try to get into the bus and people are going by them and there are little ones that can sometimes dart, so the safety of everybody stopping and waiting for those kids to be secure on the bus,” said Lisa Alterisio of Beacon Mobility.

A car in New Hampshire hit a school bus after not stopping when the lights were flashing, and earlier this year, a child was hospitalized after being struck by a car that didn’t stop for the school bus signal.

The free service uses the cameras to capture anybody who would potentially pass a school bus and then enforcement and law enforcement review the photo. If they spot a violation, then the company sends a fine to the driver.

“Historically, across all of our programs that we support. 98% of folks who receive a fine in the mail never break the law again,” said Executive Vice President of BusPatrol Steve Randazzo.

On both sides of the street, it is a violation to pass a school bus whose lights are flashing,

“Children, who we have a tremendous obligation to protect, if a family sends their kid off to school, you want the kid to come home safely, so this is just common sense safety,” said Rep. Kevin Honan of Brighton.

If amendment 136 is passed, Massachusetts would be joining 20 states in including the technology on school buses.