Help wanted at the wheel 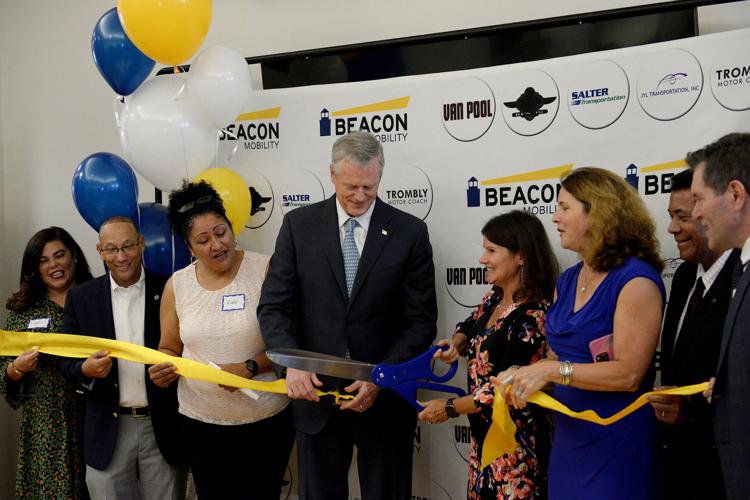 The dad arrived with his young son in a stroller to the new bus driver and recruitment center in the heart of downtown Lawrence Thursday with no inkling the governor would be there within a few minutes to cut a ribbon and celebrate its opening.

Julio Mella, 55, of Lawrence, a former dump-truck driver two years removed from the Dominican Republic and living in Lawrence with his wife and their two children, had heard that 276 Essex St. was a place where he could apply for work.

He drove there looking for a dependable job with benefits that pays enough for him to support his family.

When Gov. Charlie Baker entered the new air-conditioned office with high ceilings, he instinctively stopped along the wall of well-wishers to scooch down and say “Hi” to Mella’s child and shake hands with the dad.

As it turned out, based on all that was said at the grand opening of the Lawrence Recruiting and Training Center, Mella looked to be the kind of person the transportation companies would be glad to bring aboard.

“This is one-stop shopping,” said Edith Yambo, vice president of recruitment for Beacon Mobility, a national transportation company with affiliates in Massachusetts that operate buses and vans transporting students.

The center has at least 200 driver openings for NRT Bus, Van Pool, Salter Transportation and other companies, she said at the podium, as colored balloons for the event floated behind her.

The positions offer drivers flexibility, training and a chance to make positive contributions to young people’s lives, bringing them to and from school, Yambo said, first in English and then Spanish.

People can apply in Spanish or English, receive training in either language and be hired as certified licensed drivers for careers that they can feel good about, she said

The grand opening was bilingual.

Lidia Taveras told the room that for 15 years she has driven school children in Lawrence and Methuen, and raised two children while she was working.

She brought them with her on the bus. Today, they are in their early 20s. Her daughter is studying for a degree in psychology at UMass Lowell and her son is a member of the U.S. Army Reserves.

“This is exactly what this is about — to do something special for people in your community,” he said, before issuing a rallying cry for everyone to get to work.

Baker and others didn’t sugarcoat the moment, as employers in many sectors across the state and nation are having a hard time finding employees.

Last fall, due to a dire shortage of school bus drivers, the governor activated more than 200 Massachusetts National Guard members for almost two months in cities including Lawrence.

Secretary of Labor and Workforce Development Rosalin Acosta said she has seen Lawrence come together in moments of crisis, and the city is emerging from a pandemic that inflicted disproportionate hurt from which it is still recovering.

Lawrence has a 6.8% unemployment rate, the highest in the state and New England. The rate for the Latino population, at 7.9%, is almost twice the state rate, she said.

The governor invited the guest speakers and participants to slip behind the wide, yellow ribbon for a countdown as it was cut with oversized scissors.

The center is open Monday through Friday from 9 to 4 p.m. No appointments are required.