Welcome back to school. Your new driver is wearing fatigues. 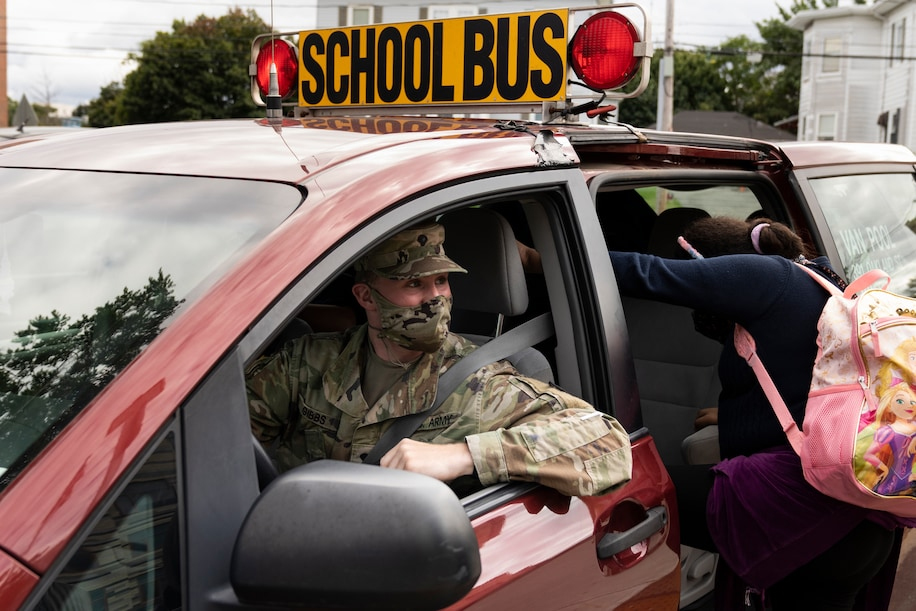 CHELSEA, Mass. — When Sgt. Phillip Hickman served as the crew chief on a UH-60 Black Hawk helicopter, he was responsible for maintaining the aircraft, firing a mounted weapon and overseeing everyone on board.

His current mission involves a different kind of cargo: middle-schoolers.

On a recent afternoon, Hickman was sitting behind the wheel of a silver school transport van wearing fatigues and a matching face mask. The dismissal bell was about to ring.

“I’m used to manifests and moving people around,” said Hickman, 36. But this “is the last thing I expected.”

Hickman is part of an unusual and unprecedented assignment. Faced with a shortage of school bus drivers, Massachusetts has deployed more than 200 members of the National Guard to help nine communities get their kids to school. People with knowledge of National Guard missions in the state say they can’t recall another time when soldiers have played this kind of role.

While Massachusetts is the only state to take such a step, the scarcity of bus drivers is impacting school districts across the country, leading to transportation delays, the disruption of extracurricular activities and even the suspension of in-person learning in a handful of cases.

The sight of men and women in uniform driving children to school highlights the profound ways the pandemic is reshaping the U.S. economy. There are shortages of workers in restaurants, hotels, day cares and nursing homes. The supply chain remains warped. But at the same time, new businesses have opened up at a record clip.

“The pandemic is so counterintuitive and paradoxical,” said David Autor, an economist at the Massachusetts Institute of Technology. Economists are racing to understand the labor shortage, he said, but the most prevalent explanations — that government aid and uncertainties around child care have diminished the willingness to work — are not yet supported by data.

Autor believes many workers are simply changing tracks. Some people “have realized, ‘Wow, those jobs are more terrible than I realized,’ and they’re trying to switch to new activities,’” he said.

To deal with the shortage of school bus drivers, communities and businesses have had to improvise. School bus companies are offering free training and thousands of dollars in sign-on bonuses to attract recruits, whose wages can range from $16 to $30 an hour. Some states, like New York, have tried to speed up the licensing process for drivers. Philadelphia is offering parents $300 a month to drive their own kids to and from school.

Mirna Ardon lives in Chelsea, a tiny, densely populated city just north of Boston. She said her 14-year-old son Angel didn’t have reliable transportation for weeks — the bus was late or didn’t show up, and her husband couldn’t keep dropping off their son without losing hours and pay at his job.

Angel, who is autistic, struggles with interruptions to his routine. “The unreliability was making everyone agitated,” said Ardon, 44.

The first time Ardon saw a soldier behind the wheel of her son’s school transport van, she was relieved. The National Guard had been present in the community during the crushing first wave of the pandemic, distributing food and helping her neighbors. “There was trust and respect there,” she said.

On a recent Saturday morning, 27 members of the National Guard gathered at dawn in the parking lot of a Sheraton hotel near Boston. They practiced how to turn on a school bus’ stop sign, operate its wheelchair lifts and conduct the all-important post-drive walk through to ensure that no kids are left behind on the bus.

Later in the morning, an instructor congratulated them on passing their written tests and issued a final, crucial reminder: always make sure kids have someone waiting for them when they get off the bus.

John McCarthy, the chief executive of NRT Bus, was overseeing the training. Even before the pandemic, the school bus industry was scrambling for workers, McCarthy said. But he’s never seen anything like this. As September approached, his normal workforce — about 3,700 drivers — was down 15 percent.

Some of those who had left were older workers who decided to retire or didn’t want to risk possible infection. Other people took new jobs during the long months while kids were doing remote learning — jobs such as delivering packages for Amazon and UPS. “We’re all fishing from the same fishing hole,” said McCarthy. (Jeff Bezos, the founder of Amazon, owns The Washington Post).

McCarthy emptied out his own offices to lend a hand with the shortage, putting managers and dispatchers behind the wheel. Often that has left just one person in each of the company’s locations. “Everybody else is driving,” said McCarthy. “It’s been a very stressful time.” He added that the firm has seen an uptick in recruits in recent weeks, giving him some hope that the acute shortage won’t last forever.

In New York, the situation is similar. David Christopher, executive director of the New York Association for Pupil Transportation, estimated that there were about 55,000 school bus drivers in the state before the pandemic and 15 to 20 percent of them have left the profession. “It’s the aging driving force, it’s the pandemic, it’s the availability of other kinds of jobs,” Christopher said.

Many school districts are finding ways to manage with fewer drivers, but if something goes awry, the consequences can be dramatic. Melinda Smith, superintendent of Thompson Public Schools in Connecticut, received a phone call early on a Sunday morning last month telling her that half of the district’s bus drivers had either tested positive for the coronavirus or were in quarantine.

Normally, she said, the bus company could pull substitute drivers from other locations. This time it was impossible. Unable to transport children, the district had to return its nearly 1,000 students to remote learning over a two-week period.

“This is the first time in my career that this has ever happened, that we can’t get kids to school,” said Thompson, who has worked in education for 40 years.

In Massachusetts, Gov. Charlie Baker (R) authorized the deployment of up to 250 National Guard members to help drive children to school on Sept. 13.

At least nine cities are receiving assistance, including Chelsea, Lawrence, Lynn, Holyoke and Framingham. Timothy McGuirk, a spokesman for the Massachusetts Executive Office of Public Safety and Security, declined to say whether more cities would join them or how long the help would last. “We are just focusing on the mission,” he said.

That mission, called “Children First,” has soldiers driving various types of vans to transport children to school, rather than regular buses. That’s because such vans require what is known in Massachusetts as a “7D” license that is relatively easy to obtain. To drive a large school bus, a person needs a commercial driver’s license, which can take weeks.

In Chelsea, schools superintendent Almudena Abeyta initially hesitated to bring in National Guard members as drivers. Chelsea is a majority Latino community with a large immigrant population and Abeyta wondered how parents “would feel if someone in uniform picks up their child for school.” But after conferring with other city officials, she said yes.

When the school year started, Abeyta’s office had been flooded with calls from parents saying their kids were arriving to class late, or took forever to get home, or the bus never came.Some people might say that the situation isn’t an emergency, she said. But “educating children and getting them to school on time, in my opinion, is worth the National Guard coming in.”

On a recent cloudy afternoon, three soldiers arrived in quick succession and parked their vans outside the front entrance of the Morris H. Seigal Clark Avenue School in Chelsea.

Richard Gibbs, 23, was sitting behind the wheel of a red van with a bus monitor at his side. These days he rises by 4 a.m., drives his van from Camp Curtis Guild in Reading, picks up the bus monitor and two rounds of children, then returns by around 9 a.m. — before doing it all again in the afternoon.

A boy arrived carrying a black backpack, a sweatshirt tied around his waist. He bumped fists with Gibbs, then climbed into the back of the van and fastened his seat belt. “They’re great kids,” Gibbs said.

A few vehicles down, Hickman, the former helicopter crew chief, leaned out the driver’s side window to review a list of students with the school’s special education coordinator. He said that the kids have adjusted to their new driver with a minimum of fuss.

Only rarely does a student ask him about being a soldier. Instead, Hickman said, they just want to know “why they aren’t home yet.” 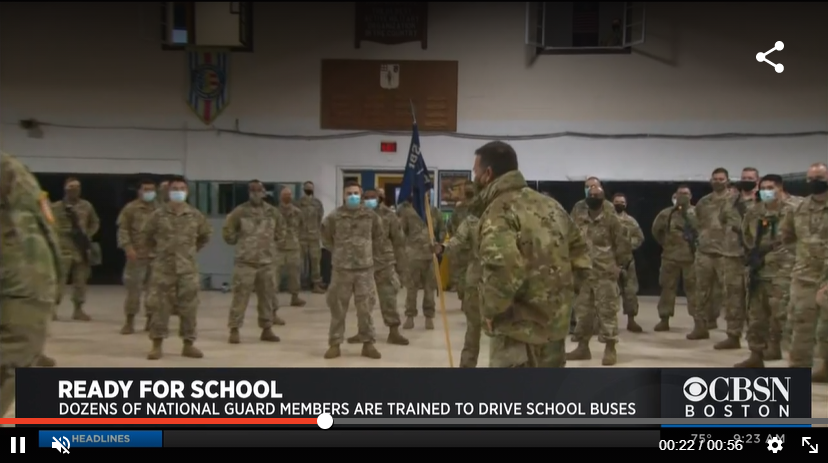 READING – It usually takes longer than one day to become a school bus driver but more than 60 members of the Massachusetts National Guard were able to go through the entire process Tuesday at Camp Curtis Guild and they’ll be ready to hit the streets this week.

Sixty-seven members of the National Guard left Camp Curtis Guild with a new 7D certification in hand and will begin bus routes throughout Lowell, Chelsea and Lynn as early as Thursday.

(On Sept. 14) we had 75 members come out and 67 passed that course, which was great,” NRT Bus CEO John McCarthy said. “These folks will be in uniform, meeting kids just like bus drivers do, bringing them to school, so they’re really excited about this mission.”

John McCarthy is the CEO of NRT Bus – which provides transportation for students throughout Massachusetts and is working to train National Guard members.

“They’re very positive about taking children to school, they think it’s a unique opportunity to connect with the community in a different way,” McCarthy said.

McCarthy said members started the day at 7:30 a.m. and went through fingerprinting, classroom exams and road tests, all to help the state deal with a shortage of bus drivers. NRT Bus reports it was down 350 employees three weeks ago but said the National Guard will be able to fill the void as they recruit new drivers.

“These folks went on and found other jobs,” McCarthy said. “We also had a little bit of a challenge with the unemployment being extended to where it is but we’re seeing a lot of candidates come in through the door now.”

McCarthy said another 65 service members will be training for their 7D certification Wednesday at Camp Curtis Guild and they’re set to begin helping the Lawrence school district on Monday.